‘Born to fly’ grandmother 106, now tries a dive from 12,000ft
She made an experimental flight in a chair under a kite while holding an umbrella aloft at Woodlands in February 2005, later that month she made her official debut at the 10thInternational Kite Festival at Pasir Gudang, Johor.
Her name is ‘Opah Terbang’ (Flying Grandmother) and according to Shakib Gunn, founding Member of the Singapore Kite Association, she is the mascot of the Association and she was born to fly.
Opah Terbang, dressed in smart batik pants, fashionable court shoes and with wavy silver hair looks every part the smart grandmother, except that she is not human.
Shakib explained, “Although she is full size and sexy, for her age, she is in fact full of air. Free-falling with her from 10,000ft at 220 kilometers per hour before the parachute opens presents a challenge, she could disintegrate into the thin air or blow up.”
Three people will be involved in the dive this Sunday on the last day of the Second Skydive Festival Singapore being held at Marina Bay.  Professional skydiver and tandem-master for this experiment will be Mark Gazley 32, from Melbourne who will harness Shakib Gunn 71, who in turn will be taped to Opah Terbang.
Opah Terbang and Shakib even has a cert to prove it:

August 14, 2005
Sembawang, Singapore
Celebrate! Sembawang! was an event organised by the Sembawang Citizens' Consultative Committee. The local residents celebrate 40 years of nation building with a solemn March Past and mass display performances such as Silat, Yoga, Line Dance and Dragon Dance.
SKA was there to showcase a range of kites and to facilitate the Kite Painting and Making Competitions. 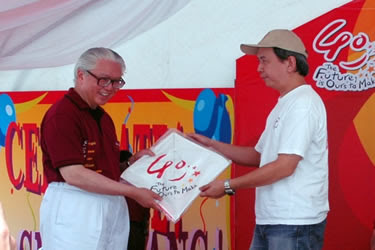 A token hand-painted kite was presented to Dr Tony Tan by the SKA President
Posted by SKA at 20:05 No comments: